Jump to content
TheGoldSovereign Community is a newly created set of forums, focused solely on the passion of collecting. Currently we are in BETA so make your suggestions known in the relevant forum! 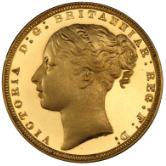 By Shaun
February 1, 2022 in General Discussion